Tales of Power was originally performed in 1976 at the University of Delaware.  It was scored for the U of D dance theater company under the direction of Debra Loewen. 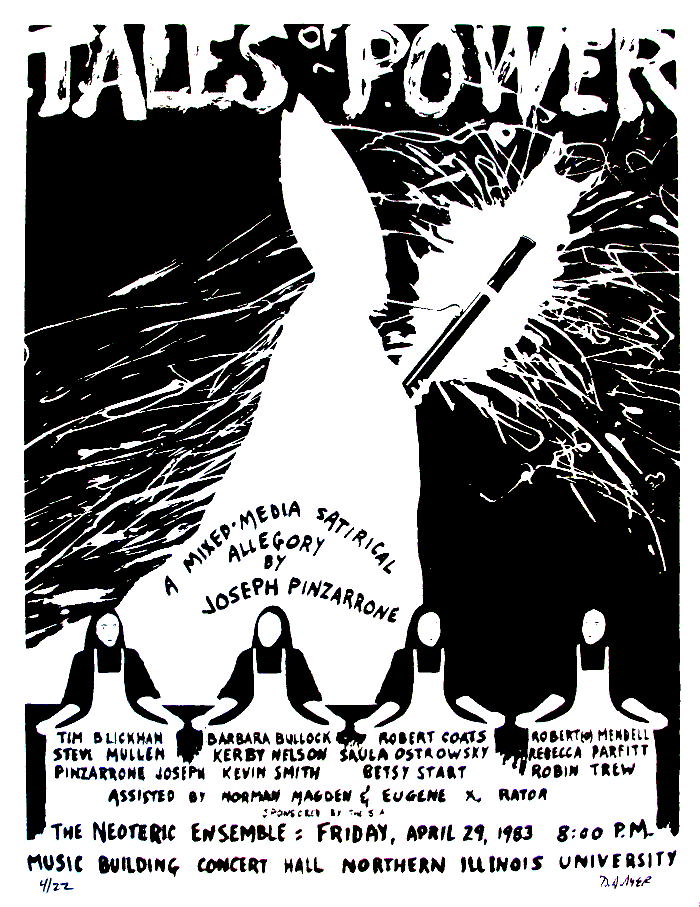 Tales of Power was later re-created at Northern Illinois University in 1983 by the Neoteric Ensemble under the direction of Tim Blickhan and myself.

The score was conceived as an episodic timeline spanning the rise and fall of a fictional character along with his allies and victims.

The story is built around Lenny, a charismatic Italian-born tailor that aspires to bring significant art to the world.  The character of Lenny is theatrically realized in triplicate—3 lithe actors wearing black plaited pants and white shirts with oversize black-framed glasses and slicked-back hair.

Lenny is a composite character—part Carlos Castaneda as apprentice to Don Juan, part young Adolph Hitler as frustrated artist and political aspirant, and part Italian immigrant earthy artisan.  Ambitious for public attention and personal aspiration, Lenny is charming and politically colorful.  He also represents an unwitting misogynist political leader that does not see the implications of his social instincts.

Lenny is nurtured and supported by a chorus of Italian Mamas—a group of black-shrouded women with white aprons.  The chorus was initially conceived for the U of D dance theater company role and Debra Loewen devised the original chorus choreography.

The Italian Mamas are nurturers of Lenny but they are among his many victims as well.  They were intended as a Greek chorus with familiar character and theatrical characteristics.  An implicit reference is to the chorus of women in The Bacchae.

Another enabling character is the Bassoonist-Pope who is seen as a world-wide political benefactor (and apologist) to Lenny as his fortunes rise.  Loosely modeled on Pope Pius XII, this character blesses a male-dominant political agenda with a controversial role in subsequent Fascist policies.

The audience is invited to play a role as well—they are the ‘good Germans’ who can cheer or jeer at the events.  A suggested interpretation is for ushers to seat people in politically active sections of the audience and to provide them with cheers and confetti and leadership during the performance of the show.

Lenny has a mentor, a mysterious Don Juan character that encourages Lenny’s flights of fancy and humbles him with topical mysticism.  The Don Juan character was introduced by the actor Dana Smith (aka Dick Uranus) in Delaware and was utilized as a pair of characters:

Lenny’s mentor stimulates him with the heroic myths of antiquity and the magic of personal discipline.  The character of Don Juan represents the enabling forces of education and radicalization on a politically astute popular icon.

The story of Lenny is seen in theatrical scenes:

The highlights are theatrically presented loosely in sequence, but with simultaneous or duplicated episodes staged around the theater.

Moreover, a life-size marionette is scored for the ‘trial of Lenny’ scene as the prosecutor.  Theatrically, the prosecutor marionette should be in the heart of the crucifix-stage (the theatrical middle of the performance space).  This was technically accomplished by running marionette strings through rings in the ceiling and allowing a puppeteer to manipulate the prosecutor from a theater-balcony.

The Lenny character on trial uses a (ventriloquism) puppet to interact with the prosecutor.

The use of puppets and marionettes is for the purpose of exposing the political nature of such trials and this one in particular.  As Hitler survived a trial and conviction and jailing , he became a popular political force. In large part, it was because his statements and publicity were lionized and published.  Lenny’s staged trial and imprisonment follows this model.

The Italian Mamas form a prison—by tying their apron strings together and creating a barrier around Lenny—a nurturing family connected with outside news-media.  They not only imprison him, they can provide the special perks desired by imprisoned powerful people.  As well, they can interface with the press-world on Lenny’s behalf and provide clips and comments.  They become spokeswomen for  his cause.

The overall piece is an evening’s length theatrical event.  The theater is modified to extend the stage throughout the audience seating and create a ‘theater-in-the-round’ effect within a conventional proscenium.  The audience therefore is packaged into sections and the composition provides roles for the ‘ushers’ to be team-leaders for these sections.  In this fashion, the sections of the audience have a role to play (or not) and this is loosely within the context of enabling voters or poll-respondents.  They can cheer or boo the policies and political travails of the characters.

Instructions for the team-leaders include the passing out of pencils and paper and the collection of comments on note-cards.  The ending of the piece calls for these note-cards to be torn and lofted as confetti over the images of Lenny preparing for suicide.

The staged imagery illustrates the core scenes of the timeline.  A centerpiece is the ‘trial of Lenny’ through puppetry, where his simple philosophy is revealed to popular resonance.

A procession of the bassoonist-Pope through the theater demonstrates the popular appeal of an archaic and male-oriented domination of politics.

Radio-play taped interviews with victims and participants in the Women’s War supply a context and detail to the imagined military confrontation between men and women.

Lenny’s diary-like demise is fitting, alone and adrift, a celebrity without understanding of his true impact, lost in his self-absorption, he submits and departs.