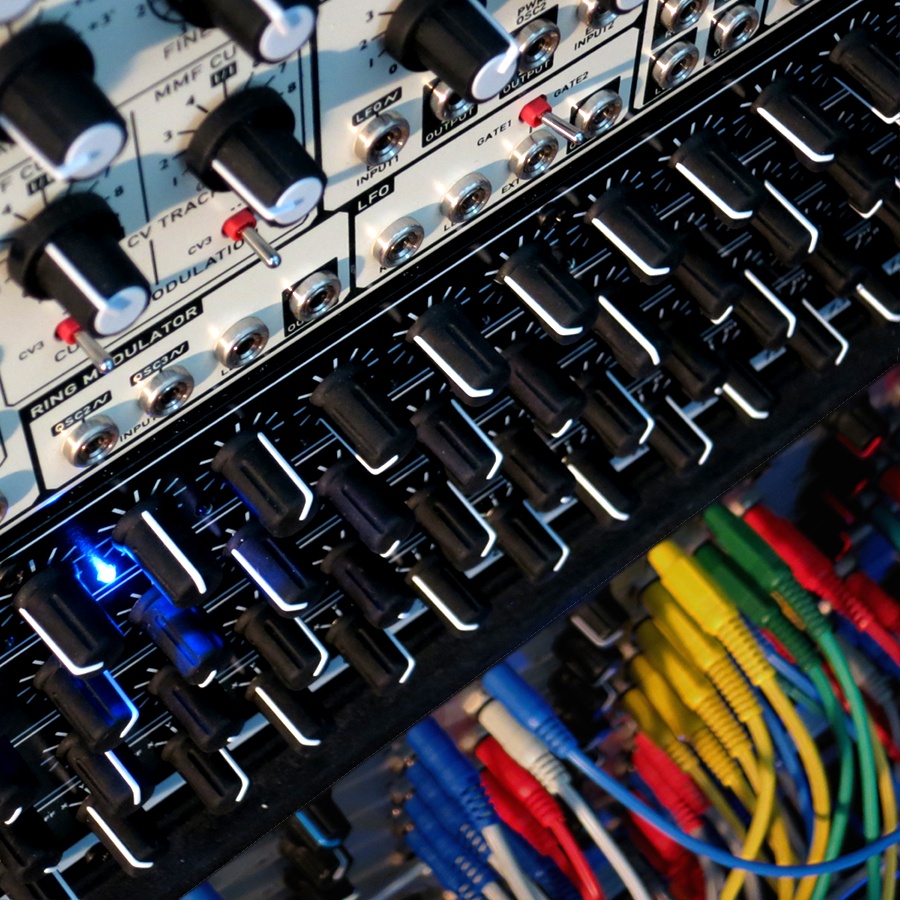 I had the joy of a delayed childhood with regard to electronic music, which I discovered as a real thing sometime around 1985. I had no protracted formal music education nor did I dive into the mean street scene of late 1970’s New York in my brief residence there. Instead, I came under the spell of the EM muse when I stumbled into a hacker’s paradise of sorts.

As son of a music professor, I had been introduced to Wendy (née Walter) Carlos’ Switched On Bach at a young (and contemporaneous) age, discovering rock’n’roll synth players on vinyl soon after. Having given up on the piano with some determination at the age of six, even as I was drawn toward that late ’60’s synthesizer sound I knew better than to aspire to play what I thought of as keyboard instruments. By the time I discovered EM “purists”—think Terry Riley’s Persian Surgery Dervishes or Xenakis’ Concret PH—I had relegated the whole tribe of “Electronic Musicians” to the superclass of “star performers” inhabiting a mythic, televised media realm outside my own personal fishbowl: beings I could observe and appreciate, but would likely never meet—let alone be—myself.

Northern Illinois University’s Intro to Electronic Music was open to undergrads and graduate students and had (…apparently? Maybe my memory is hazy here) no ineluctable prerequisites. Better still, though music majors had priority, anyone could take the course. I had some exposure to the program through my wife’s association with the Music Performance degree program and had just completed an undergraduate program in Sculpture with a minor—disconcertingly challenging and mathematical—in Physics. Electives sounded…good. I was already blowing up electronic breadboards in pursuit of sculpture that moved and made noise without breaking down easily, but was also struggling to churn out a full course-load’s worth of material, a problem I came much later in life to associate with my stubborn refusal to adopt a “style” (though having a family along with too much other coursework may have had a bit to do with it). Now, a whole new kind of studio beckoned, one unshadowed by expectations of material productivity and without the high cost of wood, metal, tools, and hardware. I signed up.

The introductory semester’s assignments revolved around magnetic tape collage (musique concrète a la Pierre Henry) using a pair of two-track, reel-to-reel Revox A-77 workhorses. The recordings we made were remarkably physical on tape, and slicing and manipulating the medium with razor blades and splice tape to create new sounds was not unlike woodworking or poster-making. The notion of tape loops was a revelation, the actual operation of a mixing board not nearly as exciting as the mere fact of its availability. For me, analog tape work became another form of sculpture, and the studio another wood shop. It felt like something I could just take and then, maybe, quickly get good at.

up a [metaphorical] skirt or two

But the NIU Analog Studio was also home to more exotic toys. Though officially reserved for the second semester course, a small battery of analog synthesizers was just as ready to hand. Lab time being lab time, you could do whatever you wanted, and if you’d managed to grab the early Saturday or Sunday morning signup slot, there was a good chance your hungover successor wouldn’t be coming in. The officially sanctioned hour could easily stretch to two or more. And so these things were all mine for many a weekend morning:

That’s how I remember it, anyway. We called them “analog” synthesizers back then; “modular” if they needed patch cords to function or could be disassembled and their functional parts rearranged. In the digital era since, their method of operation is known as “subtractive,” yet another sculpture connection.

I flirted with the Arp for a few weekends, gleefully scraping Joan Baez’ voice off the vinyl and into its ring modulator like so much sausage meat. I was baffled by the incomplete state of the remaining Moog modules and their attendant keyboard, its balkiness exacerbated by my lack of skill, its ribbon controller—such a thrilling idea—frayed beyond repair. Each time I managed to complete my tape assignment before my right to the room was challenged, I would try turning on something new and seeing what sound could be conjured up. The VCO-VCF-VCA paradigm started making a tiny bit of sense. I quickly learned to prefer a four-step to a two-stage envelope generator.

These early synth explorations evoked the same tingle as discovering my older cousin’s dolls when very young. There was something alien, enticing, but—ultimately—broken and forlorn about these relics. Rode hard, put away wet by the end of the seventies, few had all their original parts—at least, in working order— and many were missing entire limbs. Their secrets seemed elusive, perhaps irretrievable; their operation mysterious, bending only grudgingly to musical intent; their attractions vaguely perverse.

Then I stumbled on the EML 400 “Sequential Synthesizer.”

The EML 400/401 was a two-piece combo set up as a box and lid with a dense multi-conductor cable between the two. The rather large “box” contained a fairly basic monophonic synthesizer and a front panel with an array of 1/4″ phone jacks; slide pots with red, black, and grey caps; and a tall row of red LEDs. It also housed the main on/off switch and power supply circuitry, along with a multi-pin connector for cabling up the lid section. Although the front panel had “EML 400 SEQUENTIAL SYNTHESIZER” stenciled in large and impressively futuristic-looking letters (the font was almost certainly Eurostile Extended), I have visited collectors’ sites that refer to the synth box portion as the EML 401. Presumably, someone once had benefit of a manual; certainly there was none in evidence in the studio!

So, let’s call the big, boxy synth part the EML 401. The module arrangement itself was fixed, pre-wired in the usual LFO-VCO-VCF-VCA order, though its front panel jacks allowed most control voltages and some signals to be intercepted between functions. The jacks also invited experiments such as patching signals between the EML 400-labeled box and other gear: the EML 200, by the same maker, was presumed compatible and had a S/H section; the Moog, though outfitted with the same style phone jacks, was somewhat less cooperative. (I came to understand and identify certain proprietary tricks used by boutique manufacturers after a while, then watch them recapitulated by every computer and consumer-electronics maker in the form of pointless format and connector variations for the next three decades: the failure of openness plagues the tech world still.) Despite the connectors, if the 401 synth box were all there was, it would have been one of the more limited devices in the studio: capable, but not thrilling.

The sequencer section built into the “lid” was an entirely different story. The EML 400 faceplate was the same size as the 401’s, though the lid was only a couple of inches deep. It was studded with forty-two switches, ninety-six (yes, 96!) linear slide pots, and thirty-two LEDs in addition to a couple of lamps and a few jacks. Two of those odd, multi-pin connectors were present, suggesting multiple lids might even be connected together. Almost everything on this panel was grouped into two groups of sixteen sequencer steps: each group had five switches to control overall parameters such as quantization and octave range, plus three rows of sixteen pots and a single row of sixteen switches. The groups could operate in parallel to vary six control voltages over up to sixteen steps, or in series to vary three CVs over thirty-two steps. The rate at which these steps were traversed was controlled by a master clock on the 401 “box”. Voltages were communicated back to the 401 through the odd multi-conductor interconnect cable. The 400 could thus “instruct” the 401 section to play sixteen entirely different sounds—or thirty-two quite diverse sounds—in series. And if a patch cord was used to connect the last stage to the first, it could play these series in a loop forever.

The beauty of the 400 to me was its physical, visible representation of a pattern of discrete analog sound settings and their sequence in time. This was similar to standard musical notation but subtly different and—at least to my mind—both more intuitively accessible and multi-dimensional. One row of slide pots was usually assigned to oscillator frequency, so the height of the slider knobs on that row could be “read” as relative pitch, much like a traditional score. A step could be treated as a rest if the pot were set to a certain position (or elided entirely, depending on a switch position). But timbral settings and metamorphoses, too, were as visible as melodic lines once a row of sliders was assigned to control, for example, a filter cutoff frequency. Volume was likewise visible if the row was assigned to the VCA; the ppp—fff written notation was unnecessary, yet the control was there. And everything could be tweaked in real time.

One bank of pots could be assigned to control the clock, enabling syncopation and complex rhythmic patterns to be created and altered easily: step duration was reflected in the position of the pots in the selected row. Most step-sequencers of the day were single-CV affairs and tended to deliver a fast but isochronous eight-step beedle-deedle-deedle-doodle rhythm, often triggered by a key press. The clock frequency could be modulated by an LFO, say, and one could derive a syncopated beat that way. The EML, by contrast, was designed to create, control, and adjust phrasing and complex rhythmic patterns on the fly. As long as you were content with sixteen or thirty-two discrete notes, you could craft whole songs.

Perhaps I was fortunate in my lack of keyboard skill. There wasn’t a fully-functioning compatible keyboard available, so the typical means of triggering sequences were not ready to hand or somehow crippled. I remember using various S/H modules and another minor miracle—the envelope follower—residing on other synths to kick things off. Most of our serious music students were probably extremely frustrated by the lack of controllers that suited their advanced skills in the plucking, fretting, and pressing departments, but I got on just fine.

back to the future

Now, forty years after these machines were built, they’ve gone from remnants on the bone-pile of history—eclipsed by MIDI, ultimate revenge of the well-tempered clavier, and digital electronics in general—to exotica. An Arp 2600 in almost any working condition will fetch ten grand, scratchy pots and all. Don Buchla kept to the high ground for the most part, turning out handsome, hand-made modular kit for thirty years, and then rebooted his 200 modular a decade ago: a 200e base system will run you a bit over five grand US, but you can easily spend thirty on, say, the System 7. Robert Moog—having sold thousands of stomp-boxes and Theremins as well as full-fledged, nicely packaged mono-synths for years—resurrected his famous modular designs in 2014, and now you can purchase a brand-new System 55 for something in the neighborhood of $35,000 US.

No one has resurrected the EML 400/401. Last I checked, a few were still in existence, reportedly “functional” for seven thousand and up. I’m no collector, but I can’t help thinking about it.

Rather than embed their pictures and text, I’ve included several links to web pages at Vintage Synth Explorer and Sound On Sound. If any of this interests you, do pay a visit to their sites.

Anyone looking to actually buy any of these collectors’ items—the real antiques, not the reboots—would do well to visit Tone Tweakers first and to subscribe to their email newsletter and price list. As few of some models as were made, there’s still a lot out there.