Word from the Grave – ArtBus

In 1985, the Neoteric created and sponsored an event known as ArtBus. 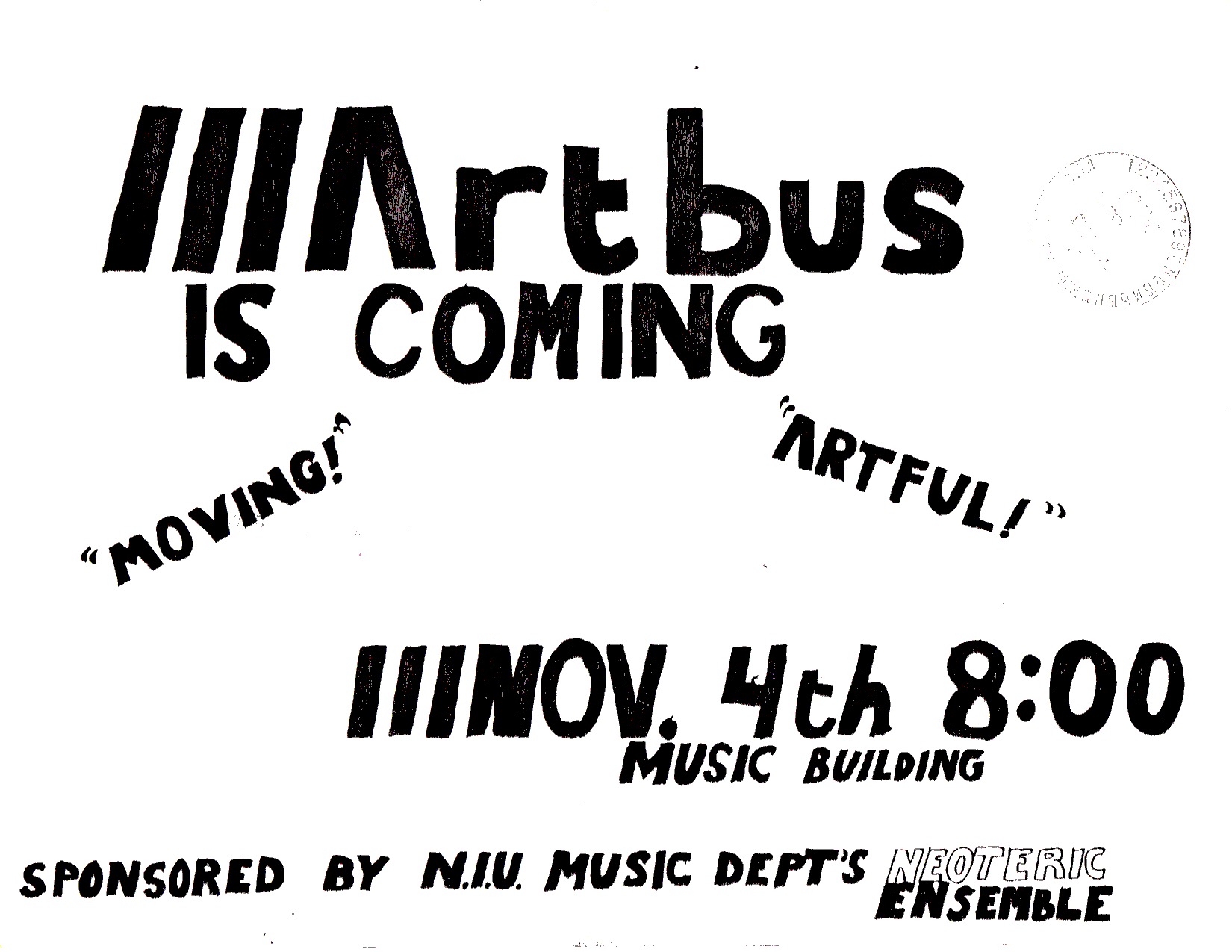 This ArtBus poster was a sendup of the Artrain logo ca. 1985 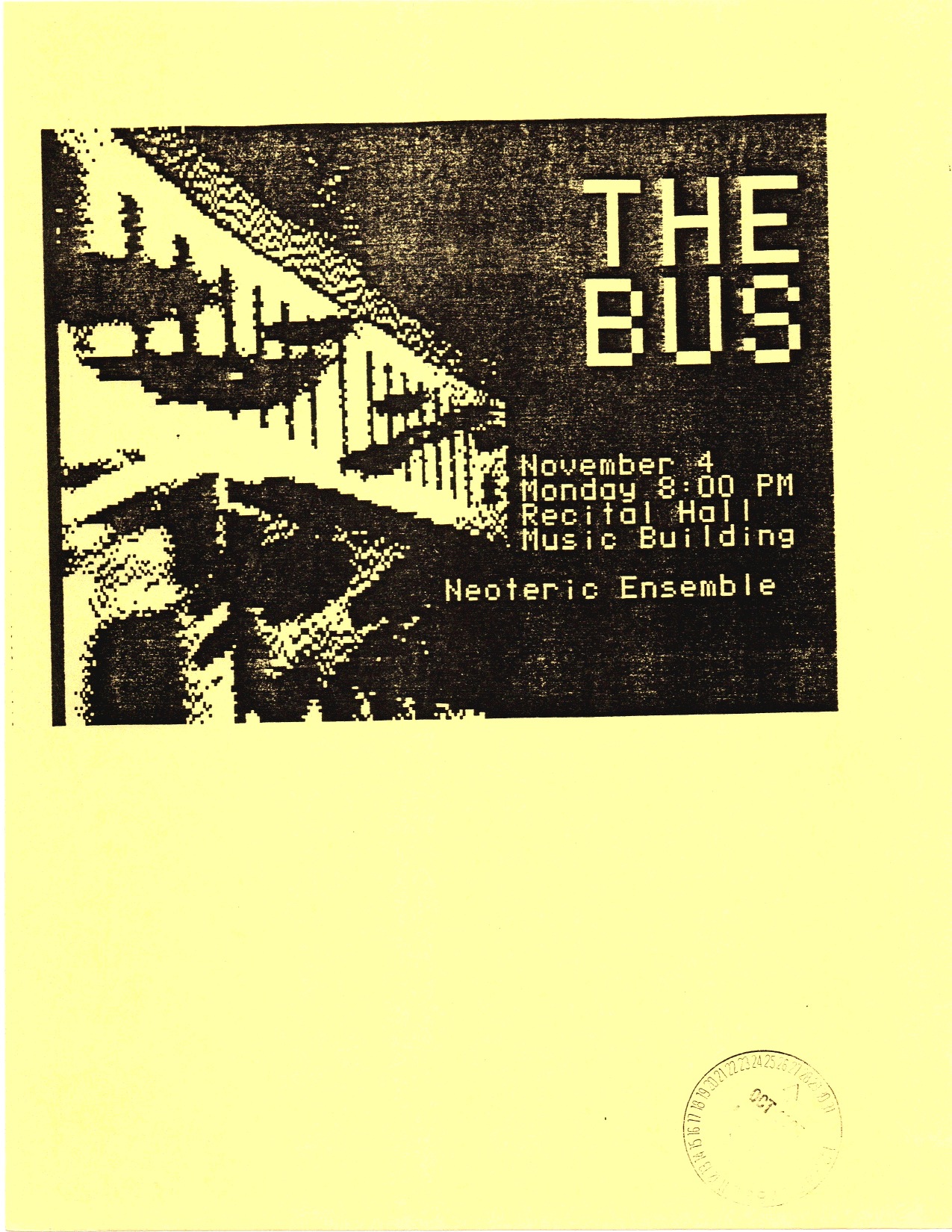 …another used photos from the electronic music studios 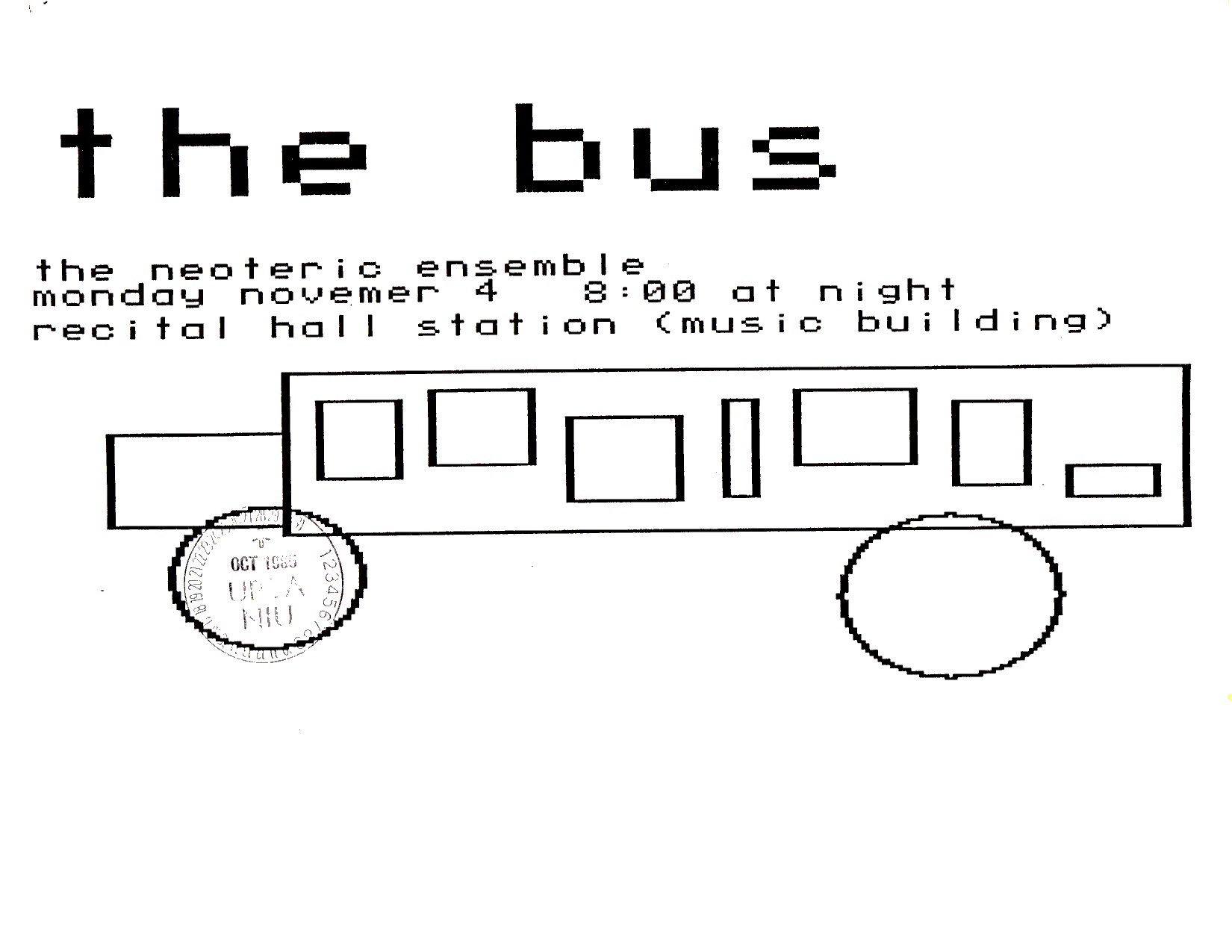 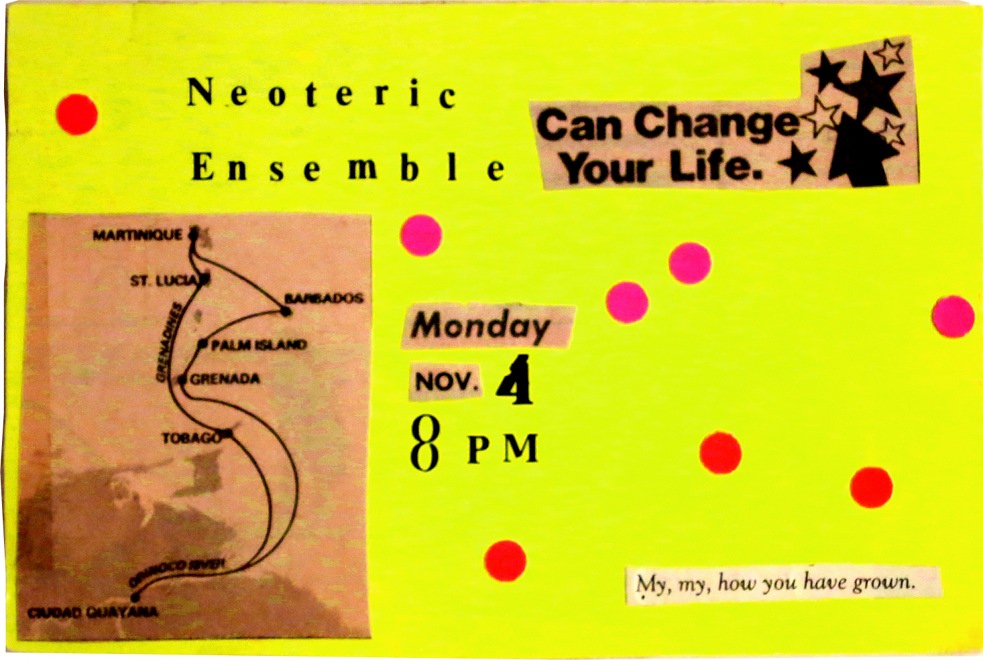 Rebecca Ayer’s postcards were not sanctioned by the S.A. nor by the Reagan administration 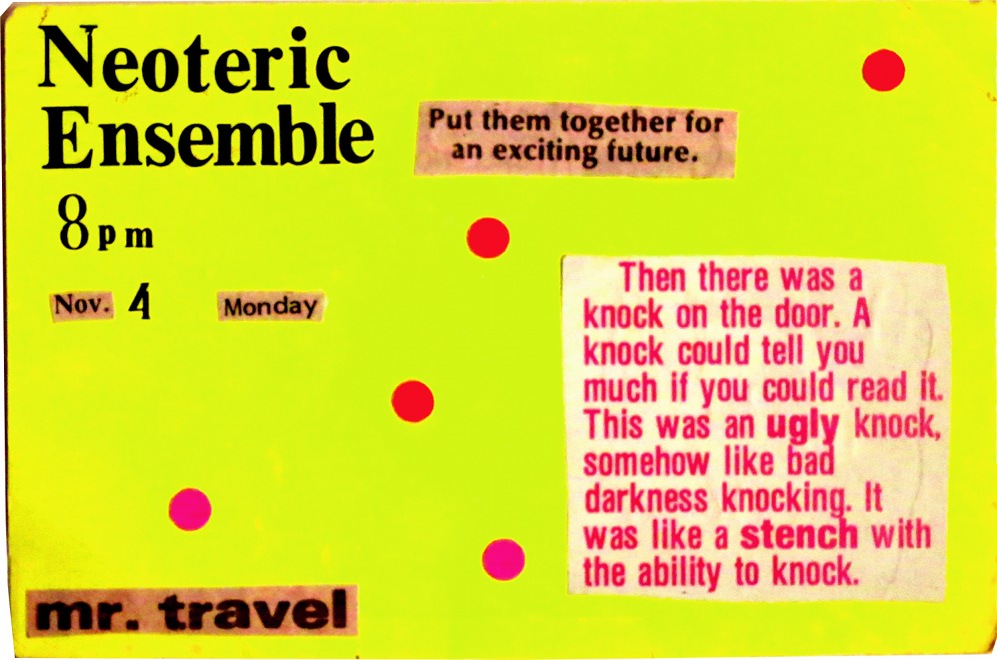 …nor by Dow Chemical, for that matter

Begun in 1980, the Neoteric Ensemble took its place among the official ensembles of the NIU School of Music as the group dedicated to new music. In addition to providing the required concert evening per semester, the Neoteric was a driving force behind the annual Great Electric Pumpkin Patch, ostensibly a Halloween electronic music fun-fair.

The Neoteric soon opened auditions to artists, dancers, and performance auteurs – the semester performance requirement became an opportunity for an invented full-evening theater piece with the group emphasis on the totality of the event, and not just performance.

By the time of the ArtBus, the Neoteric already had a campus-wide reputation for unexpected alternative concepts, possibly political or shocking or naughty. There proved to be an audience for this kind of attitude – the Neoteric refused to be docents for a “new music” museum, and instead sought a gentle mocking of conventions with undue seriousness.

The ArtBus was inspired in the Neoteric rehearsal/planning sessions by the booking that semester of the Artrain by the College of Fine Arts. Like many university and town communities, DeKalb had subscribed to be a recipient for the Artrain, which was ostensibly a moveable feast (by rail) of “fine art”. The Artrain was sponsored by Dow Chemical (in conjunction with local destination funding) and essentially carried valuable traditional art pieces from town to town for viewing outside of the traditional museum experience.

Dow Chemical was also famous as the originators of Napalm and as one of the manufacturers of Agent Orange. Both were controversial chemical weapons used during the Vietnam war with deadly consequences for enemies and partisans alike. In the aftermath of the war, Dow and others were under a great deal of legal and moral scrutiny into the devastating, lingering effects of the application of their chemical weapons.

Like many wealthy companies, PR and money spent by Dow on “community service” was a valuable antidote to the reputation garnered by the makers of weapons of war. The Neoteric discussion considered the implications of this kind of manipulation of reputation and the complicities inherent.

There was an anti-elitist populist thread in our discussions. The Artrain purported to bring great Art to the masses by train (reminiscent of the 3rd Reich art-trains of selected “great art”). The local Artrain destinations also co-funded the moving display – local museums, universities, and townships were all required to support the effort, else the Artrain would bypass those venues.

Like many Artrain destinations, DeKalb had some protestors based on Dow Chemical’s reputation and some refusal to give them a PR-pass.

The Neoteric decided to turn this concept on its nose. Instead of an Artrain visit with contributions from local elites, the ensemble would commission an ArtBus costing nothing aside from participation. Instead of carrying “great art” to boondock communities, the ArtBus would carry audience members to local and unusual locations for unique art works.

Performance locations and routes in planning 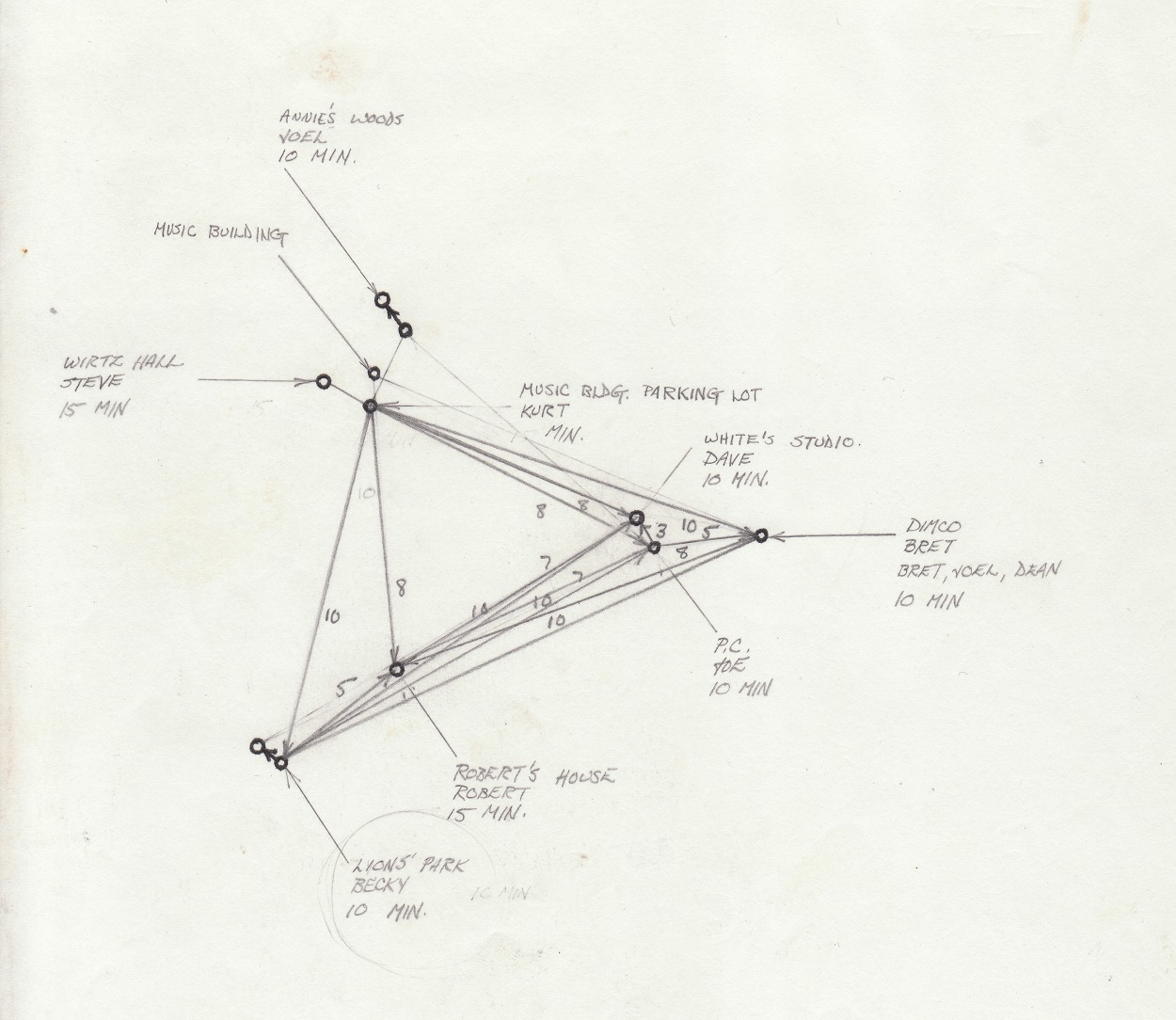 Timing, being everything, was painstakingly planned with Larry 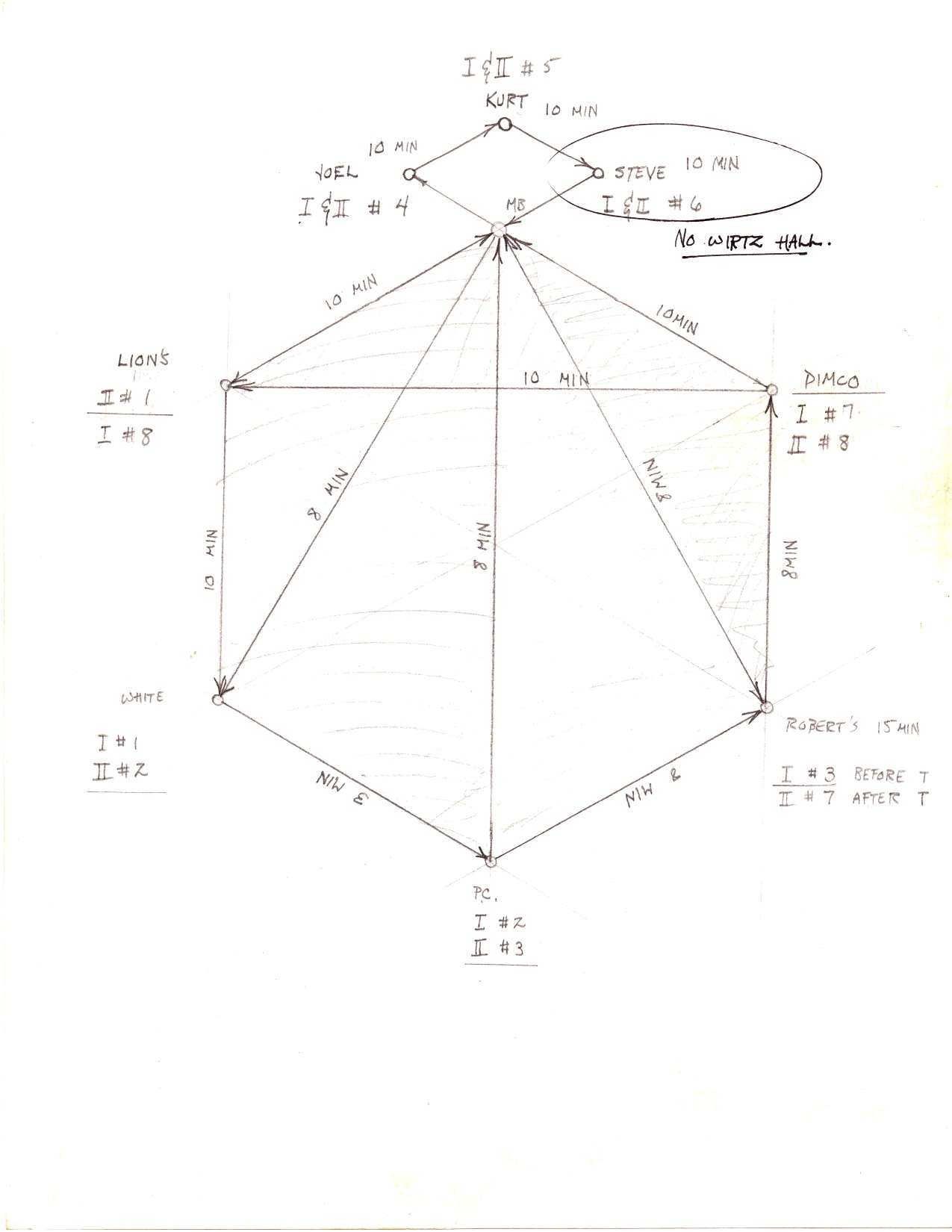 How would a “blue-collar” Artrain concept work?

Members of the Neoteric took responsibility to create short and new art pieces in chosen and remote performance locations around the DeKalb community. The locations included indoor-outdoor spaces around the city, some requiring permission from local businesses and others requiring assent from private property owners.

Larry Nordstrom was a key conspirator. A local bass-playing musician, Larry was also a day-job bus driver in the DeKalb/NIU community. While the Neoteric’s official status as a campus-sanctioned organization allowed us to commission 2 buses and 2 professional drivers for the concert-evening, Larry arranged to be one of the drivers and also selected a 2nd driver.

We had a panoply of 10-15 minute performances all over town. With Larry, we created 2 separate bus routes that reached and stopped for each performance venue in complementary orderings. Larry worked with the troupe to time everything in detail so that we would have 2 buses with separate variations on the stops though with the same menu of performance locations.

On the night of the performance, the Recital Hall was turned into a bus station. Tickets were taken and schedules were published. Each of the two buses had some “sleeper” performers who pretended to be participants, but affected some on-bus artistic experiences.

One remarkable occurrence was a result of Larry’s efforts to cause a unique “bus moment”: while 2 buses on 2 different schedules were active at the same time, orchestration of the routes allowed for riders on both buses to have the singular experience of driving in parallel for a few minutes down Lincoln Highway, the main drag of DeKalb. Bus riders were treated to the specter of another bus alongside, similarly lit-up and packed with art-gallery goers. Larry was ecstatic as this could never have occurred in “real life”.

I’ll leave it to others to describe some of the mini-pieces at bus locations and on-board the buses.

This was a very popular Neoteric effort – carrying an audience to mini-performances was a big hit. Comparisons to the Artrain were inevitable (if not intended) and some of the publicity compared the two relative to the community.

The event was considered a popular hit and the local news media picked up on the mocking notion of a “blue-collar” Artrain. I was rewarded by a command meeting with the Dean of Fine Arts, Stan Madeja.

Stan was recently selected to head the College. I was on the selection committee and I had voted against his selection. I remember that one of his credentials was working for an organization that published exotic academic texts (deemed unpublishable elsewhere) with exceptional cost to the author. He even showed samples at his interviews – the cheapest possible printing and binding techniques used. It was clear he got a salary and his organization made money off these professors in need of some kind of vanity or professional publication. The results were shoddy and embarrassing.

As a blue-jeaned exotic myself, though recently tenured by the University, I asked Stan why he wanted to see me. He laughed and said “ArtBus”, shook his head. The meeting went downhill from there.

1 Response to Word from the Grave – ArtBus